Russian Olivye Salad (Salat Olivye) is a Holiday classic in Russia! It’s made with diced potatoes, carrots, Doktorskaya sausage, peas, onions, pickles & boiled eggs dressed with creamy mayonnaise! This salad is packed with flavor & so easy to make, perfect for the Holidays, large parties, or BBQs. 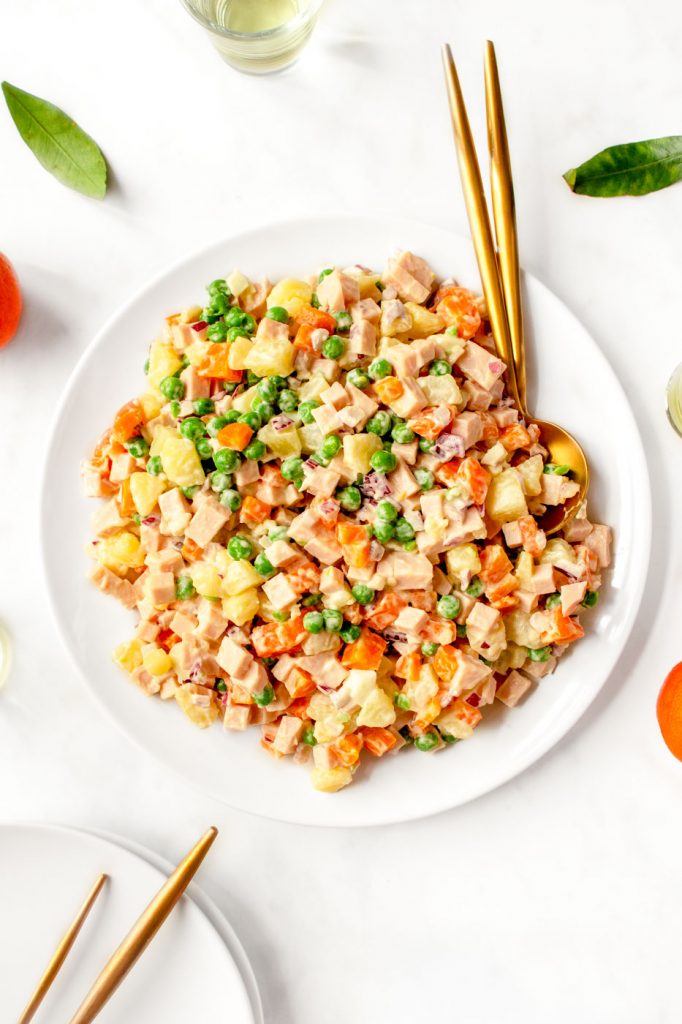 Today I made you a giant plate of Russian Salad aka Olivye Salad!

This quick & easy side dish is sure to be a crowd pleaser: it’s creamy, packed with flavor & super colorful! It’s great for the Holidays or whenever you need a side that comes together in under 30 minutes & that everyone will love.

It can also be made ahead of time & stored in the refrigerator for a day or overnight so it really is the perfect Holiday/party side, right?! Let’s make it together!

Ps: Grab a glass of Champagne & don’t forget your mandarins if you’re making this for NYE!!!

Why mandarins? Russian Salad is considered a Holiday staple in Russia, especially on New Year’s Eve & mandarins are one of the two symbols of NYE (along with Champagne)! Can you spot the mandarins in the picture above?? 🙂 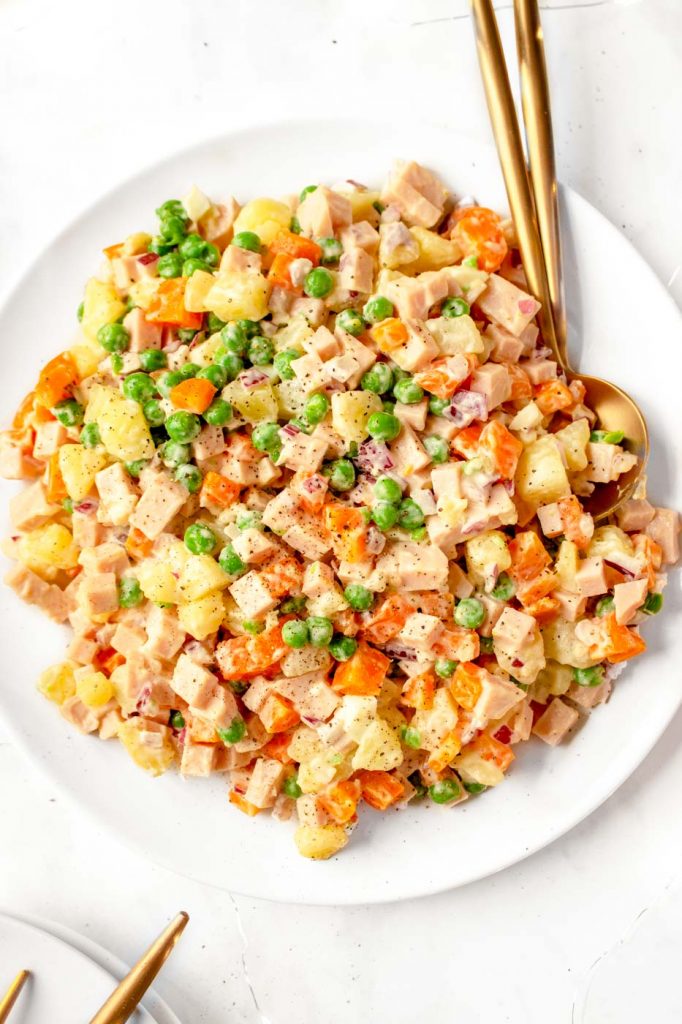 What is Russian Olivye Salad?

It’s considered a Holiday classic & many people like to serve this dish on New Year’s Eve which is why I wanted my Russian Salad to look a bit festive in the photos!

And btw, this is actually the modern version of Russian Salad! Olivye Salad was first invented in 1860 & back then they used to make it with ham, veal tongue, or fish (like lobster) & other ingredients.

Doktorskaya sausage is super similar to American-style lard-less bologna so if you can get your hands on one of those, great. If not, feel free to use cubed ham or even cubed turkey!

💡 FACT: Did you know that Doktorskaya sausage literally means Doctor’s sausage? It was first produced in the ’30s & was supposed to be a dietary supplement for people exhibiting signs of starvation! 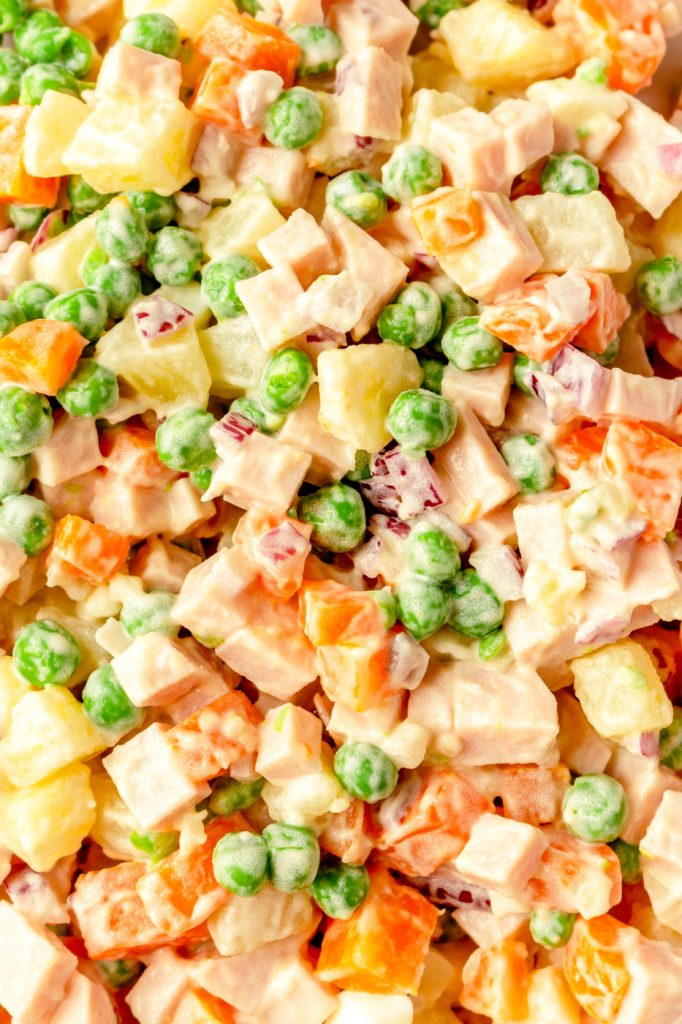 Why is it called Russian Salad?

Olivye Salad was invented by… wait for it… Lucien Olivier, a Russian chef of French & Belgian origin. Get it? So to keep the French pronunciation of the word “Olivier” (you don’t really pronounce the “r” at the end of his last name), Russians simply transformed “Olivier” into “Olivye”.

Anyways, good ol’ Lucien invented this salad back in 1860. He was the chef of Moscow’s most popular restaurant at the time & his salad quickly became the restaurant’s signature dish. Eventually, one of his sous-chef attempted to steal his recipe & sold it to different publishing houses making it even more popular!

Nowadays people from all over the world, literally from Latin America to the Middle East, make this salad so shoutout to Lucien lol. 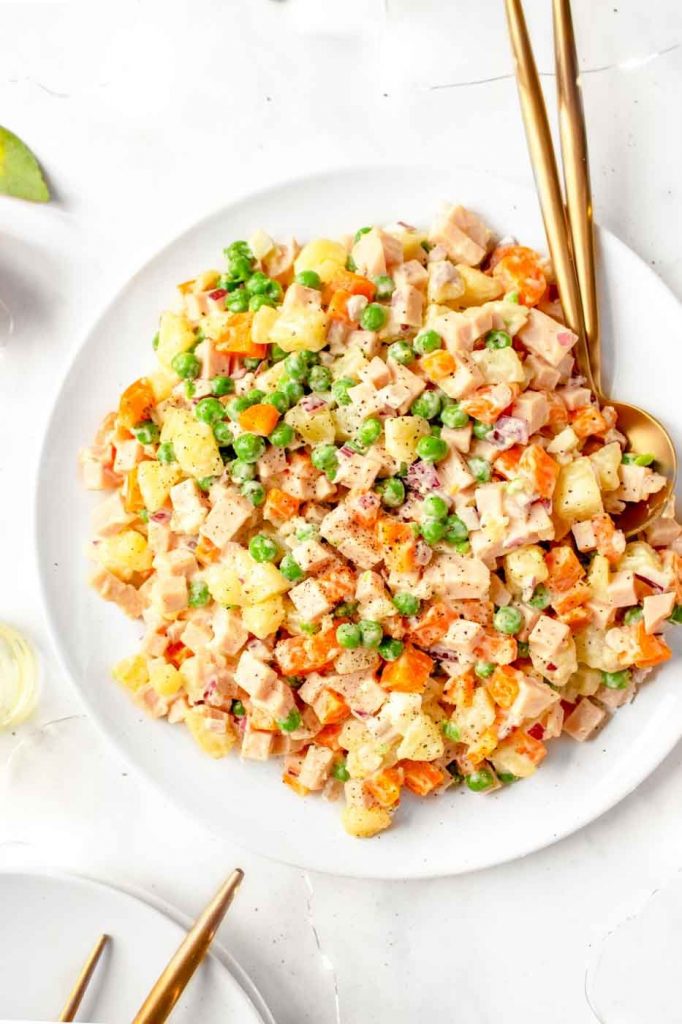 These are the traditional ingredients but like many traditional recipes, every family makes their own version & they’re all right, it’s just a matter of personal preference!

For example, I like to use red onions to add some extra flavor while some prefer to use sweet onions, green onions or even no onions!

How long does Russian Salad last?

Russian Salad lasts 3-4 days when stored in an air-tight container in the refrigerator. 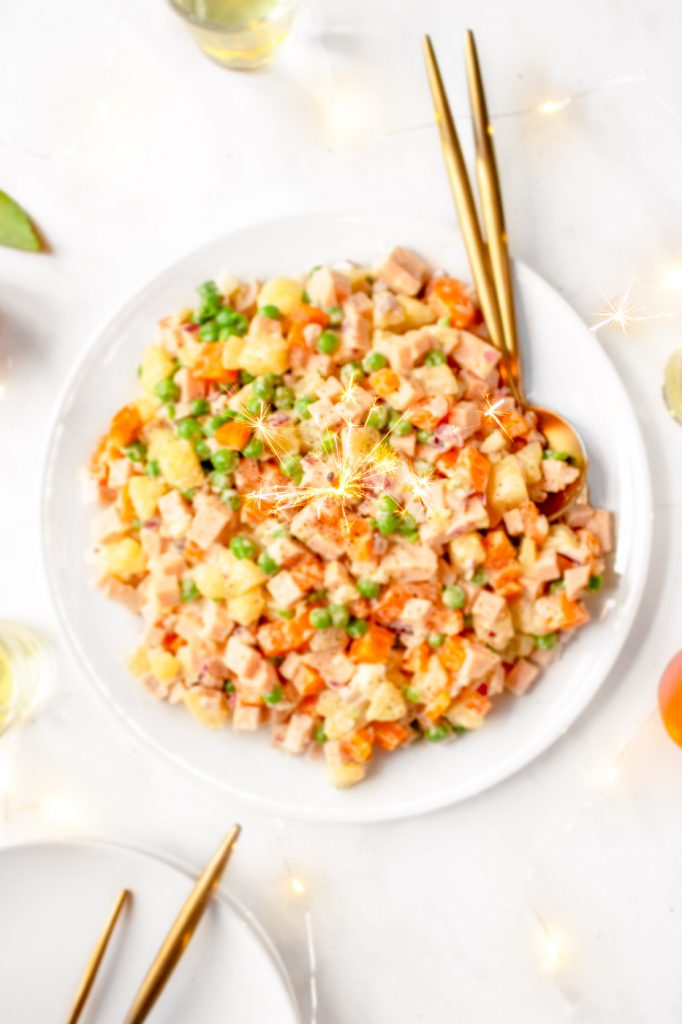 HAPPY COOKING LOVES!! I hope you’ll love this delicious Olivye Salad as much as I do!

PS: Please leave a comment and/or give this recipe a rating ⭐️ if you make it! Your comments make my day!! You can also tag me on Instagram @itsdamnspicy 🌈💘 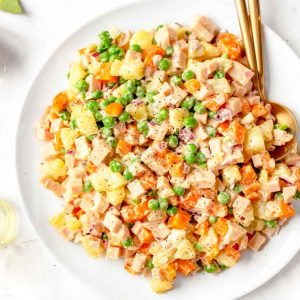 📷 DID YOU MAKE THIS RECIPE?! Tag @itsdamnspicy on Instagram and hashtag it #itsdamnspicy
Tried this recipe?Let us know how it was!
« Cherry Tomato Tarte Tatin with Feta
Honey Vanilla Cake Roll with Candied Almonds »

Welcome to Damn, Spicy! I share tried-and-true recipes from my trips around the world!